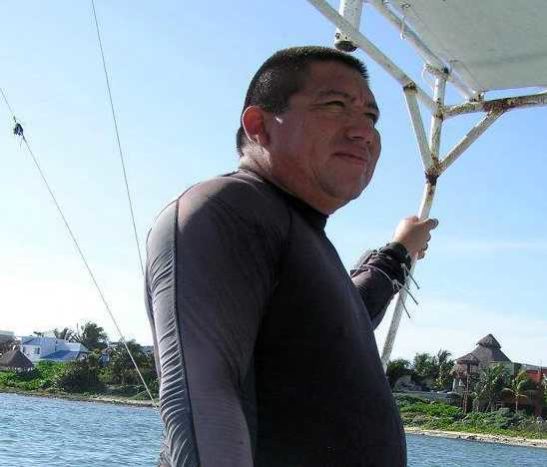 On April 14, 2014, Jose “Pitón” Dzul of Chemuyil was in a tragic car accident outside of the town, sustaining severe head trauma, a punctured lung and was hospitalized in Playa Del Carmen. Sadly, he succumbed to his extensive injuries on the morning of April 18, 2014 after being transferred to Merida. His burial took place on Easter Sunday.

Jose was a beloved and well respected friend to the community of Akumal, Mexico. He was an expert Dive Master at the Akumal Dive Center and a resident of the nearby community of Chemuyil. Prior to working at Akumal Dive Center, he was also with Akumal Dive Adventures. Jose was part of the REEF fish study program in the Meso American Reef and many stories were shared by fellow divers who called him the Ninja of the Sea. One such story describes how he found a fin a diver had lost the day prior when boarding the boat, knowing exactly where to look for it on the bottom of that huge sea the next day.

Affectionately known as “Pitón”, he grew up in Akumal and his parents are both employed at The Hotel Akumal Caribe. His mother has been the head housekeeper there for over 30 years and his father is the head driver for purchasing.

An experienced and skillful diver, he touched many lives with his education and expertise, his wonderful smile and generous nature. For anyone who had the honor of knowing him, the loss is great and he will truly be missed!

Jose is survived by his wife,and 3 daughters, 4 sisters and parents and numerous relatives throughout the community and beyond.

Through the efforts of many friends and divers in Akumal, $1551 was raised through music fundraisers and auctions while $6198 was raised online via YouCaring.com. The outpouring of community support in this effort was truly unprecedented. The money raised will go toward an education fund for his daughters. If you would like to donate toward Jose’s daughters educational fund please visit: Education Fund for Jose’s girls.