Cannabis, Marijuana, Pot, whatever the name. All the same.

The question people often pose: Is it legal in Mexico?

Officially speaking, you are allowed to carry up to 5 grams of cannabis on you, but cultivation and distribution is illegal.  The laws are, to say the least, contradictory.

Unofficially, the government has taken a soft stance on small time offenders.  A local or tourist with a small amount of cannabis might get a slap on the wrist and quite possibly a shakedown for a $200-$300 peso bribe.  For these reasons, lighting up in public, or carrying some around as you stroll 5th Ave, might not be a great idea.

But the tide in Mexico is slowly turning.  Slowly because public support in Mexico is still much lower than it is in the States.  This is mostly due to the violent drug trade.  Many Mexicans equate cannabis with cartels and subsequently with violence.  Mexico is also a highly religious country, majority Catholic; so it does not help that the Catholic Church is also staunchly opposed to all uses, saying “A drug is a drug even if it’s sold as a soft medicinal balm….Recreational marijuana is a placebo to ease the pain of social destruction in which we irremediably wallow.”

Mexican President Enrique Peña Nieto was staunchly against cannabis when he came into office.  In a 2014 interview with CNN he made it clear that he viewed cannabis as a gateway drug, leading users to more harmful drugs.  He also believed that legalization would result in more violence.  President Nieto said he would need to see how things worked out in U.S. states that legalized consumption, what changes in social behaviors could be observed.

A year later a group of four cannabis legalization activists won a supreme court ruling that deemed the criminalization of the use of cannabis violated individual rights.  The plaintiffs in the case were free to use, cultivate, and transport cannabis however they saw fit.

Shortly after this ruling President Nieto ordered his cabinet to create the National Forum of Debates for the Legalization of Marijuana. The creation of this allowed a forum to debate the merits of cannabis and allow the president to see a broader scope of the use cases and public support and opinion.

In a December 2015 speech Nieto said, “I am not in favor of consuming or legalizing marijuana.  I am not in favor because it has been proven, demonstrated, that consuming this substance damages the health of children and youth.  However, I am in favor of debate, so that specialists can give us some indication of where we should be going.” 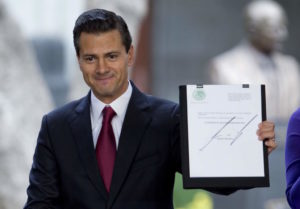 On June 19, 2017 President Nieto took another large, though mainly symbolic, step forward by signing a decree legalizing medical marijuana and classifying the psychoactive component of cannabis (THC) as “therapeutic.”  The real meat of any change will occur when the Ministry of Health drafts and implements regulations and public policies that regulate “the medicinal use of pharmacological derivatives of cannabis sativa, indica and Americana or marijuana, including tetrahydrocannibinol (THC).  The ministry is also tasked with developing a research program to study the drug’s impact before creating policies.  The bill currently limits product to containing 1% THC or lower.

In the United States, black market sales have shrunk significantly when recreational use is permitted.  In Colorado legalization dropped this market to about 25% and that number keeps falling.  When you are talking about billions of dollars, it is clear that the cartels are losing a lot of revenue as legalization sweeps across the U.S.  Mexico can also reduce their demand by opening a legal and taxable market, further reducing the cartels’ power while greatly increasing tax revenues at a time when the country really needs it.

Shameless Plug: The author of this article is an investor in legal cannabis projects in the United States. If you are an accredited investor and have interest in learning about such investments please email [email protected] for details on current opportunities.