A Series On Women Living Sola In The Akumal Area

Stages in life are guaranteed for all of us. For some, these stages are defined by careers, for others in family events; and for some, in successes and failures, in the love interests we’ve had, and for others in the loss of love. One can only hope that the transition from one stage to another is easy. For this woman of Akumal, each transition has been greeted with a positive attitude and determination to not allow them to bring her down emotionally or financially. 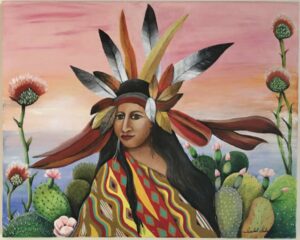 The most recent stage in her life is taking place here in Akumal, a place she skirted around during a trip in 1973 with friends on a private aircraft who were plane hopping from Chichén Itzá, to Cancun, Cozumel, and Tulum. She remembers Cancun’s landing strip, which is now the road on which Costco is located, and that there were only four hotels on the strip. At that time, Akumal was barely on the map.

Born in Kansas City in 1935, her family moved frequently to accommodate her father’s job as a military doctor and psychiatrist who treated World War II veterans suffering from shell-shock (today referred to as PTSD). With every move she got very good at making friends and fitting in. It helped that she was sociable, attractive, and “not too stupid”. After years of moving around, they finally settled in Kansas City where she attended college as an

art major near St. Louis, Missouri.  While attending the University of Kansas she helped build the foundry which allowed students to do bronze castings. One of her pieces of art was the first bronze statue out of the foundry, a primitive skull, which has long since sold. She shows me one other statue from that foundry, created in 1955, of a female nude, evoking both sensuality and strength — a theme that would run through most of her life.

At 20 years of age she decided to marry her college sweetheart, the handsome captain of the university football team who was attending medical school. They settled in Philadelphia where she graduated with a Bachelor of Fine Arts from Temple University while her husband finished medical school, but life was about to finish its first stage. After six years, at 26 years of age, she decided to move on with her life outside of the marriage. “He was a wonderful husband. The kindest, the most loving, the most honest and honorable, and I loved that he adored me.”

Returning to Kansas City, she took a teaching degree and taught art for one year. On a whim, she decided to take a friend up on her offer to go to Washington, D.C. and stay in a dacha. After a weekend of partying, she returned to work to discover she’d missed the mandatory orientation and her contract had been canceled. For most people, this turn of events would be devastating, but knowing she had an opportunity to go downhill skiing with the Kansas City Ski Club, she walked away and never looked back.

Ending up in Vail, Colorado she got a job at the only ski shop in town, and ended up dating  a ski instructor, which quickly flourished into a relationship, her second marriage, and two sons Rhett and Lance whom she feels are extraordinary individuals. Life settled down a bit during this second stage, as life with a family usually does. That didn’t mean she wasn’t busy however, as they built a large building in downtown Vail which had a restaurant, the ski-shop they owned and operated, ten hotel rooms, and a top floor apartment for the family.

This stage of family, work, and marriage lasted 12 years, but at the age of 40 she was single once again. Now a single mom with two children, she opened a tobacco shop, managed a fur store, and rented out two apartments in her home in order to bring in an income. And this is how life went for years until the time came for her sons to head off to college, and she found herself alone for the first time. 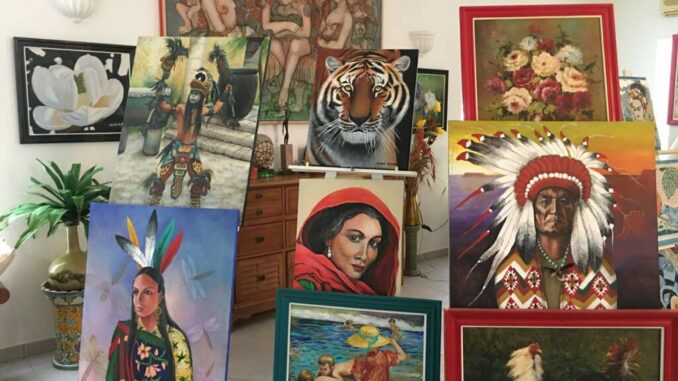 It was a few years before she met the man who would be her third husband. He was handsome and popular with the ladies. He had his eyes set on her, however and began to pursue her with a vengeance. Normally, this story would not be so out of the ordinary, but for this woman of Akumal, nothing was ever straightforward. With this, her third major love affair, the story would be more than just interesting — more than just a simple love affair. What makes this affair so interesting is that the man who was pursuing her so hard was a preacher in the local church.

The relationship remained a secret for some time, and although they could not be together, her personal pursuits kept her busy. During this time she began dealing in and collecting African antique trade beads.

Eventually though, the preacher she was in love with chose to leave the church and shortly afterward they married in St. Croix. At 55 years, everything was blissful — for a time.

She recounts one special occasion. Her husband was a golfer and had connected with some influential people. They were invited to go to the king of Morocco’s private golf tournament and soon found themselves on a private jet to Marrakech, then on the king’s train which made frequent stops so the guards could check the tracks for explosives. This period of her life was exciting and passionate. 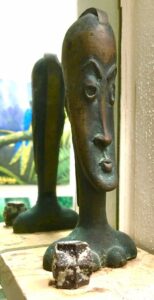 But like any stage in life, the next one came knocking. She felt she was no longer living a life that made her happy, and to top it off, her financial investments supported the marriage. No longer being financially dependent on the church, her husband was forced to deal with everyday struggles for the first time and she knew he wasn’t happy either. The marriage lasted only one year.

The fourth stage of her life began around 1994 when a friend invited her to stay in a condo in Akumal. She travelled between Vail and Akumal for a while, meeting people and making friends each time she visited. On one such visit she helped refurbish water-damaged murals in the “Grateful Dead house”. After a failed attempt to purchase a condo from a corrupt developer, she eventually did buy at Seven Seas in south Akumal. At 60 years of age she made the move to live here permanently.

By chance she sold some art pieces she’d brought with her. There was a realization that this was a place where she could pursue her art in surroundings she loved. So she continued to paint, sell her artwork, and began exploring other mediums such as tile mosaics. 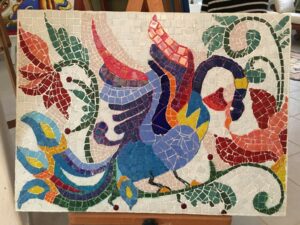 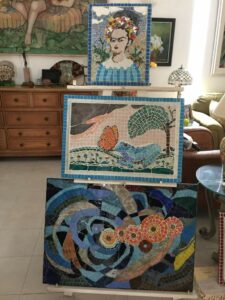 Years later she purchased property in Rancho San Martín; this began the fifth stage in her life. Here she designed and had constructed a home into which she settled, expecting to live there for a long time. It includes a large art studio and gallery in which are displayed both  her own work and pieces she’s collected, sculptures, prints, and drawings. Admittedly, when the home was being designed and built, it kept growing in size. Buildings were erected to receive friends and family, and her son Rhett purchased the house next door. “I may have gone overboard here, but I have been so grateful that I have it, particularly when this pandemic thing came along. I have my own resort.”

Even though the pandemic has prevented rental income, she knows things will turn around — she has enough things on the go to make her feel secure. “My paintings and artwork are in condominiums and homes all up and down the Riviera Maya, and they’ve also been sent to Canada and other countries.” 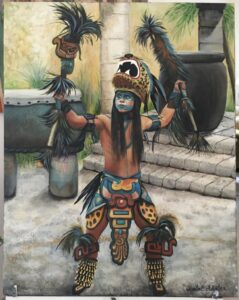 Having been in Akumal 25 years, she ponders the changes in her life and wonders where the past 20 years went. “How did I get to be 85 years old … I can’t believe it!”

If you’re wondering whether a gentleman appeared at any time during this stage, he did. “I met a very nice man that I really liked. He wanted me to come to Mexico City.” Expecting to hear about another whirlwind romance, I was surprised to hear she declined in favor of retiring in Akumal. “I like the water. Akumal is a great place. I know there are problems in Mexico but so long as I don’t stick my finger in it then there’s no problem. Fortunately, when I’ve run into things that are difficult it’s been easy because of all the wonderful helping hands I’ve had. I am happy settling in this area by the sea for scuba, and snorkeling, and enjoying wonderful friends with whom to love and play in my dotage.” 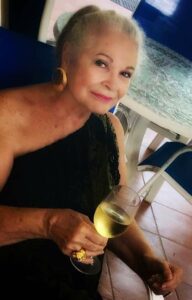 She sees all the transitions in her life not as obstacles, but as learning experiences. “I look back and I say how could I have been so dumb? Boy that was a s*$#%y decision. I say to myself — you made the choice, and if it got screwed up, who’s to blame? Only me.”

Time now is spent mostly with friends who visit frequently, and her son who lives on the adjacent property. She has staff to assist her with the necessary tasks in life, enjoys her numerous friends, and of course, there is her artwork.

We take a tour through her gallery with its strands of African antique trade beads and the its many objets d’art, and she tells me about her paintings. All are beautiful, and all are for sale!

Thank you, Isabel Schober, for sharing the stages of your life with us, and allowing us to peek into your past and your present. 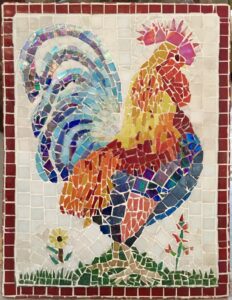 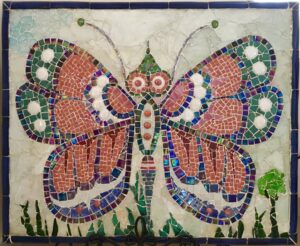 Written by Brenda Calnan, and edited by Lucy James & Staff 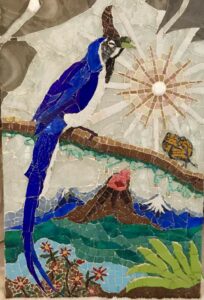