Akumal continues to be a leader and example of community and ecological support for their namesake . . .

“Place of the Turtle”

Voluntourism or Ecotourism, while not a new concept in travel, is on the rise.  As the world tries to find space to safely distance- within small groups or bubbles, while feeling the calling, to be close to nature and outside of their homes, the desire for connection with open air, space and nature has been a calling to city dwellers worldwide.   Once again, a new meaning to the oldest and most historical, original diving resort community of Akumal, in what is called the Riviera Maya, Mexico, has emerged and grown yet another symbiotic relationship between residents, that have created a lifestyle of stewardship in Akumal and the wildlife, that is a risk of disappearing without protection and change in human behaviors is receiving reprieve.

If there is one thing, many have learned through the past year, it is that maybe, urban is not the best environment, to live and work, and that outside and close to nature, leads us to being our best selves.  Especially during a pandemic!  Fortunately, for those that are living in Mexico, that happen to live on the beaches or close to the Caribbean Sea, and that bring a wide array of work and life experience, Centro Ecológico Akumal (CEA)  25 year old Sea Turtle Conservation program- was able to thrive in the May-October season 2020 despite lack of funding, disgruntled employees, three storms and beach bans- due to the Mexican governments need to try to protect the nation throughout the pandemic.

In 1995 CEA began protecting the sea turtles that came to nest every year.  At first it was a small group of divers and students from universities and high schools, throughout North America.   Eventually CEA partnered with Amigos de Sian Ka’an and worked alongside with their biologists and eventually hired a seasonal biologist.

Akumal’s sea turtle population has given reason to interpret, that not only has there been an increase in resident sea turtles in the waters despite a large loss of coral and sea grass-something like imprinting and other environmental factors has brought larger and larger numbers of sea turtle nests to the four beaches covered under the CEA Turtle Camp-over the past 25 years.  Last season was predicted to be a low season and surprised us by almost breaking the record season of 2017, providing 1300 plus nests just short of the record.   It was only because of the VT’s that protected, documented, and patrolled the beaches last season,  that we can rest assured that this information more nests could be laid and more hatchlings survived.  Gratitude and respect for Akumal’s volunteer residents I have gained from Akumal.  It is a second season of the world pandemic and the sea turtles coming.  We can expect the first reported nest in the coming weeks and again Akumal’s guardians are ramping up, to get ready to take on another season of protection and monitoring of the Loggerhead and Green Sea Turtles, both of species are endangered and protected under federal and international laws. 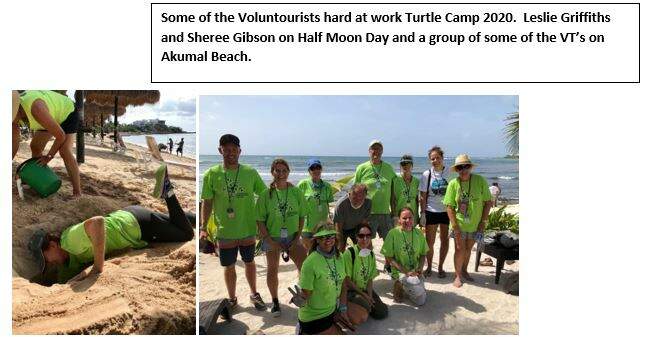 Akumal’s, dedicated and leading the way with a group of resident volunteers, called the VT’s (name change is in progress) was created over six years ago, and consists of volunteers, that have been active for more than ten years and in my case for more than 28 years.  Of course, this is not 28 years of service on my part, but I did spend at least 10 years of the startup contributing and to the startup of the Turtle Watch Program.  (later called the Turtle Camp)    The VT program that literally saved the turtles last season, was the vision of Akumal’s very own Sea Turtle Advocate, Rozanne Quinterro (Rozita).  Over six years ago, after working with technicians and biologists at different camps along the coast, she had a vision and gathered a group in Akumal, she wrote training programs- a system for entry and development of volunteers, at first the concept was to patrol the beaches, in the mornings, reporting and working in conjunction with the biologists at Centro Ecológico Akumal (CEA), but she and a couple of others often worked nights and were the face of the program.  In the picture below, Rozita, is receiving a donation of rakes and supplies from a school in Playa del Carmen. 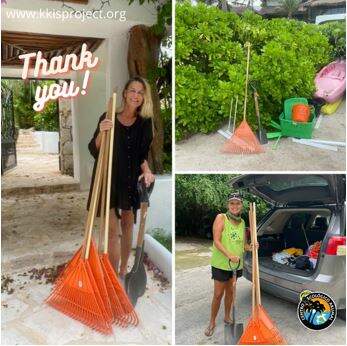 Last season, with direction from Centro Ecológico Akumal’s Director, Dr. Hector Lizarraga Cubedo, who gathered the VT’s on Zoom and realized that the VT’s were the best access to the beaches as they lived right there and the beaches were locked down, CEA was impacted drastically by the pandemic and the administration was cut off from much of the financing for staff, programs that would have generated income could not run and it was just short of a miracle what did happen with the Voluntourists.  I witnessed the power of Akumal’s community, as Hector brought together staff of CEA and the VT’s.    Akumal does have the Greatest Group of Dedicated -Sea Turtle Guardians and Advocates -and despite being retired and needing some time to relax, the VT’s that worked thousands of hours on the beaches of Akumal, particularly in Half Moon Bay, but also in Akumal South and Akumal’s Jade Beach otherwise known to us as Playa Tortuga were covered!

Mornings, late afternoons and often all night the beaches were patrolled by VT’s and called upon whenever there was danger, risk, or in the worst cases sea turtles in pools.  There were seven incidents where the VT’s mostly Rozanne,  with the help of her rescue team had to save the life of a sea turtle that landed in a pool because, the lights were leading the mama’s to the pool not the sea.  There were also many incidents of hatchlings, on the road and being run over by cars as opposed to being in the sea…The VT’s worked around the clock to save as many of the sea turtles as possible and they did succeed.

After a super heroic season last year with some great support from the security guards in both North Akumal, South Akumal and Jade Bay and Akumal Bay Beach and Wellness Resort.  We did receive some donations  from residents and property owners,  that went direct to volunteers or were to the program, like the sponsors for the red-light program and our printed materials and supplies (Terry & Din Richardson).   While we are truly short on funding it is with great pleasure, that I can say CEA has a new coordinator and auxiliary technician being added to the team for this 2021 season!    Start up for Sea Turtle Campaign funding 2021 even has something we can send to you!  A vintage Akumal Turtle Program T-shirt.    We recently had North Akumal owners, Lisa and Alex from La Fortuna, offer to donate to their VT’s on Half Moon Bay — Sheree Gibson is the liaison between North Akumal Home Owners and CEA’s Turtle Program.  They were so impressed by the work of Sheree and her team at HMB they wanted to make sure they could continue this season without having to work the kind of hours they did last year.   So they have planned to donate to the financing of technician/tortuguero working on HMB.    We are actively looking for beach sponsors —if you can adopt meters, nests or support individual staff or volunteers we would be very appreciative, as the list of supplies is low and gloves, batteries, walkie talkies,  backpacks, Sharpies, non-surgical gloves- preferably non latex, tape measurers and of course stakes and rakes and buckets and much more are needed to get the program up and running.  As a huge Thank-you…anyone who sponsors Sea Turtles Camp 2021 by contributing  $100 USD to the campaign starting April 1… will receive a vintage t-shirt once the donation is received.   To make donations please contact Mauricio Acevez or visit the CEA website https://ceakumal.org/   and press DONATE.

Donations charged through this website are processed by CEA’s U.S. fiscal sponsor, the Yucatan Environmental Foundation (YEF), and thus are tax-deductible in the U.S. You will first receive an order confirmation and then when your order is processed, a YEF receipt, which you should print for your tax records.

Claudia Leon, who has joined the CEA team as the Marine Turtle Coordinator, her responsibilities are to report to the various turtle committees that CEA operates under and to work with all community and employees on the permitted beaches of Akumal, to ensure that conservation and protection objectives of the Federal Permit are achieved.  Fortunately, CEA’s long time biologist Jose Luis Miranda (sea turtle technician and management ABBR and Hector have been representing CEA on many state and federal committees for several years and Claudia will join this ongoing work.    Claudia is not new to sea turtles and she is passionate like our VT’s about spending time on the beaches and working with the community and Akumal’s visiting mama turtles.  Claudia has worked in the protection of Leatherbacks- Cabuyal, Costa Rica-under the Leatherback Trust- followed by time in the Reserva Pacuare, C.R.   Claudia is a Licenciatura (Master of Science) in Hydro Biology from UAM (Universidad Autónoma Metropolitana-Unidad Iztapalapa-class of 2015.    Claudia will be joined by Victor Hugo Alvarado as auxiliary technician, on a six month contract-with the hopes we can find funding.  Hugo volunteered last year with the VT team and is excited to join the team again this year.  He will be returning from an injury in May to join the Turtle Camp Team.   Therefore, Claudia is working to get to know the VT’s and Akumal and is looking forward to working and learning together with the Akumal volunteers.   If you see Claudia maybe give her a warm welcome.  She joins us from Oaxaca.

The backup support that Claudia will have is not only going to be from the VT’s but, she will be able to bring to the beaches for Campo 2021  two programs- set up by CEA’s executive Hector and Mauricio.  Jovenes de Futuro- Youth for the Future -is a government program whereby youth in the community (living) will receive training and a wage for working as technicians on the beaches.  Claudia and the CEA staff will be responsible for training and scheduling of six of these youth with education in environmental studies at either the high school or university level.  The goal will be to find local and train for the long term.  These individuals will be between the ages of 18-29 years of age.  There will be a growth period as the VT’s and the new staff join forces, however my personal expectation is that the VT’s will only bring enrichment to the youth experience as well as their own, as they learn from each other.  In addition to these technicians there will be volunteers from around the world joining the Akumal Camp this year through Travelers With Cause (TWC).  If anyone living in Akumal or the surrounding area would like to join the Voluntourists the team is always looking for new members and they will provide training.

Below is a picture of Claudia she has been Akumal for a couple of weeks now,  and is getting to know the community, the CEA organization and waiting for her Auxiliary Tortuguero- Victor Hugo Alvarado- to join her on this season’s adventure. 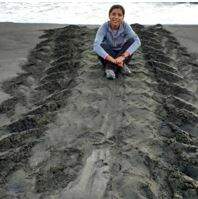