I really don’t know anyone who likes scorpions, ( el escorpión).  Maybe the people who study them have an interest, but like, I think not.  My neighbor Betsy was removing some towels from her drier last week and felt something scrape her arm. She dropped the towels and discovered a 4″ scrape on her inner arm and the culprit, a scorpion!, on her leg.  Of course she screamed, then removed the scorpion, first from herself and then from her house. Oh, the joys of living in 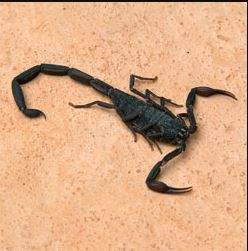 About 400 million years ago, early scorpions were very large and had gills that suggests they lived in water. Today, scorpions live in a variety of areas, from grasslands and savanahs, to deciduous forests, some pine forests, rain forests, and caves. Scorpions are found on all continents except Antarctica.
Scorpions are arachnids and are close relatives to spiders, mites, and ticks. There are almost 1,700 species worldwide. They range in size from .03″ to 9″.  They walk on 4 pairs of legs, with 2 pedipalps ( pincers) in front. Their tails have 5 segments with the aculus (stinger) at the very end. They have fine sensory hairs called trichobothria to sense vibrations in the air and  an organ on the tips of their legs that detects vibrations in the ground.

Venom is used by scorpions to capture prey and for defense. The venom is a complex mixture that affects the nervous system. The most dangerous scorpions live in North Africa, the Middle East, South America, India, and Mexico.
Scorpions can eat a great amount of food at one time and store it in a special organ. Due to very low metabolism and an inactive lifestyle, they can survive 6 to 12 months without eating. Their diets consist of insects, spiders, centipedes, and other scorpions. Larger scorpions may feed on small lizards, snakes, or mice.
Baby scorpions live on their mother’s back. My same neighbor found a mother scorpion with her babies at the top of  her bedroom drapes. Out they went! So glad I live on the 3rd floor. Scorpions glow under ultraviolet light due to fluorescent chemicals in their exoskeleton . 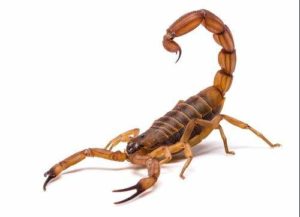 A scorpion stng is like a wasp sting. It is painful and it burns. Your tonge may go numb and the area near the sting will probably swell. If your symptoms are severe and you have a problem breathing, a trip to an emergancy room is in order. They will probably give you a shot of an antihistamine. The stings are scary, but will not kill the average person.
Although 200 species of scorpions live in Mexico, only about a dozen are dangerous to humans. The most venomous are small and pale.
Scorpions hate lavender, cinnamon, peppermint, and cedar scents. These types of essential oils can deter scorpions in problem areas like entry points. Diluted with a small amount of water, you can spray the area you think they might enter. Sometimes you might find them in a sink or tub. They seek water and are unable to crawl out.

I keep my distance and hope they do the same!  However, I keep the batteries fresh in my trusty zapper racquet just in case.