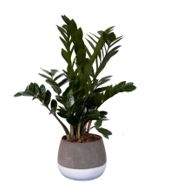 The ZZ plant is incredibly low maintenance. It prefers bright to moderate, indirect light but will also do fine in extremely low levels of light which makes it ideal for a window-less office or bathroom where it will only receive small amounts of artificial light.

Under the surface of the soil, the ZZ plant has large potato-like rhizomes which store water, allowing it to survive drought conditions. In medium indirect light, it can go as long as 1 month between waterings.

The ZZ plant is considered one of the best air purifying plants. In a NASA study, it was found it to be specifically adept at removing large amounts of toxins such as xylene, toluene, and benzene from the air.

Many cultures consider it a symbol of prosperity and friendship…the perfect housewarming gift!

—  alert reader Guillermo sent a comment re this plant’s potential danger.  The following is from Gardenista:

ZZ’s one major drawback is that all parts of the plant are poisonous.  In fact, during the 2010s there were false rumors that ZZ was so toxic that the plant caused cancer, and was so dangerous that people wore gloves when handling it.   The truth? It’s toxic but not cancerous.  Don’t eat it, keep it away from nibbling pets and overly curious children, and always wash your hands after handling it to avoid skin irritation.