Here in Akumal we are surrounded by names of streets and towns, even the name of our state, with no idea of what they represent. Here is the story of why our state is named Quintana Roo.

In 1902 when President Porfirio Díaz created a separate territory in the eastern jungles of the Yucatán Peninsula, he named it for Andrés Quintana Roo, one of the most influential men of the Mexican War of Independence from Spain (1810-1821).  In 1936 the town of Hacienda de Santa María on highway 180 in the north of the territory was renamed in honor of his wife, Leona Vicario, heroine of the War of Independence and one of the first female journalists in Mexico.  They met and fell in love in 1808 when Quintana Roo, born in Mérida, moved to Mexico City to complete his law studies. Although she was a wealthy heiress from a conservative family, she joined him to support the revolutionaries. He was in the revolutionary army in the initial ill-fated campaign, then was President of the Constitutional Congress that wrote the Declaration of Independence from Spain in 1813 and was one of the writers of the first Constitution. She was a member of the “Guadalupes,” a secret society in Mexico City dedicated to informing the insurgents about Spanish military movements and smuggling information to them. She financed the Revolution from her extensive fortune, providing the insurgents with funds for food, clothing, arms and ammunition during 1812 and 1813. She also gave financial support to the wives and children of captured or killed revolutionaries.

In the years that followed they endured many hardships. He was captured, imprisoned, released on condition of no longer opposing the Spanish. However, he refused amnesty and continued to write in support of independence. She fled Mexico City in 1813 when her correspondence with the rebels was intercepted, but was persuaded to return, whereupon she was arrested, imprisoned and interrogated in a nearby convent. Three of her colleagues penetrated the convent dressed as Spanish officers and spirited her away, dressed as mule drivers. From 1813 to 1819 the young couple lived as fugitives. She even gave birth to their first daughter while they were hiding in a cave. They both continued to write for newspapers supporting the Revolution. 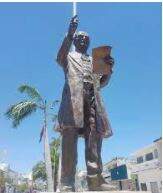 After Independence, Leona Vicario retired to private life, raising her family and managing their extensive properties. Quintana Roo spent the rest of his life writing, publishing important newspapers, and serving in positions of the government, as a member and twice president of the Chamber of Deputies, Minister of the Interior and Exterior, Minister of Justice and Judge on the Supreme Court until his death in 1851. In 1843 he negotiated the treaty that reunited the independent state of Yucatán with Mexico.

Shortly after her death in 1842, Leona Vicario was named the “Meritorious and Sweet Mother of the Fatherland” by a special commission appointed by then President Santa Ana. The couple are buried together in Mexico City. 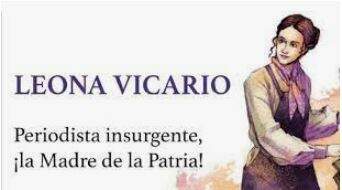