Back in 1984 or so when we stayed in Cancun, we took a day trip down 307 just for a look.  We’d been to Tulum a number of times and always stopped at the Zacil restaurant in Akumal.  That space is now the CEA center.  My husband and I were with two friends and we were looking to see something 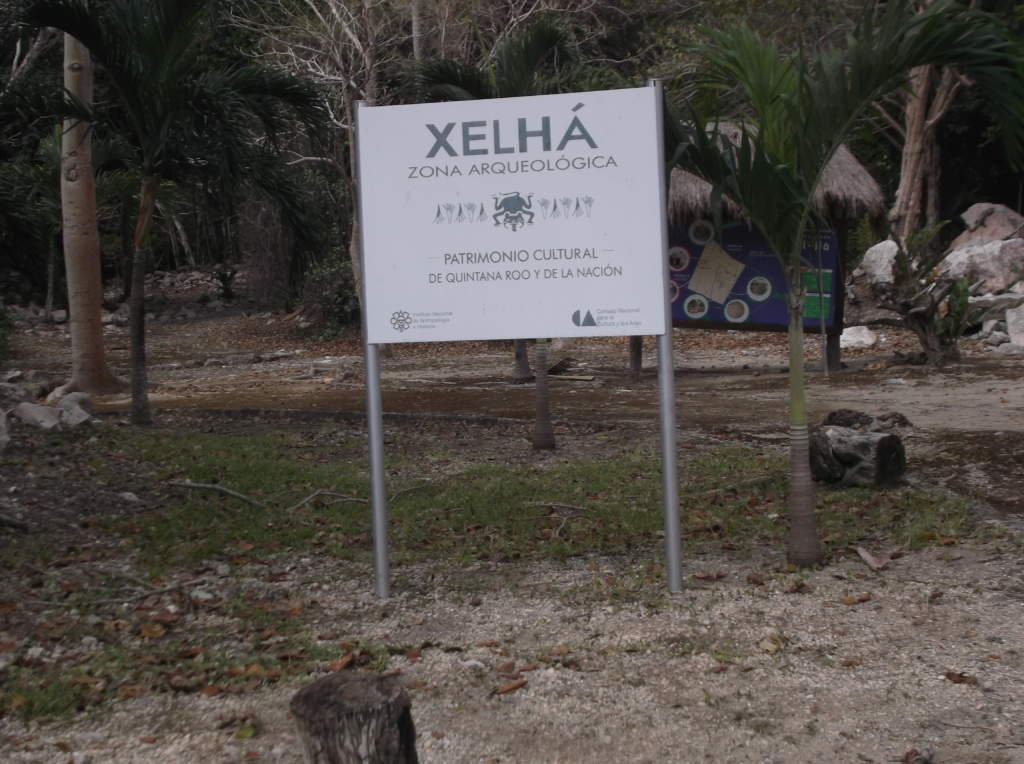 new.  As we got closer to Xel Ha, my friend Mary noted that she’d always wanted to see what the Xel-Ha ruins were like.

We pulled into the entrance of the ruins.  Not much there but a stick hut.  A man came out and took the entrance fee and offered to give us a tour.  Our other friend Lexi, was more than interested in this man.  Lexi owned a language school in Northampton MA, and spoke several languages herself.  The new guide spoke a bit of Spanish, but his native language was Maya.  With Lexi’s ear for language, she was able to converse and she unlocked one of the best days I’ve ever had in Mexico. 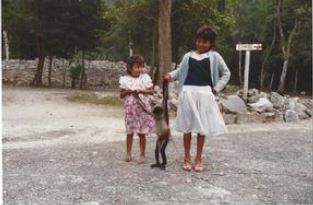 As we walked into the ruins, we met his two daughters with their pet monkey.  The man told us he had spent one month’s salary for an English language program so that he and his family could learn English and be more employable in the future.  He knew this was important.   His family home was on the property and had been for many generations.  A stick house with a Jaguar skin on the wall – a very simple way of life.

As we walked along with him, he ate a fruit and generously offered us bites, which we politely refused.  He led us to a huge cenote and told us we could swim if we wanted to. Again we politely refused.  He explained that the archeologists had just began the excavation of this site, so there were not many buildings uncovered.  The buildings that were uncovered had simple stick gates in front of their openings.  This is when I felt that my day was going to be incredible.

He lifted one of the gates off and gestured for us to go in.  We did and what we saw were walls covered with turtles!

They were very well  preserved due to their location.  The colors were mostly light brown walls with darker turtles and other designs.  Slight bits of blue were mixed in.  However, when we came to the door opening inside the building, the red hand prints on white background surrounded in blue were just unbelievable.  Obviously signed by the artists, it was as clear as if they’d done it just days ago.  I placed my hands on those red painted hands and  felt like it was one of 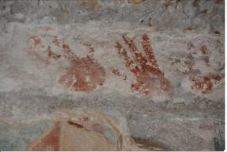 the most amazing days, ever.  This was a chance to see murals that most of us will never see again in this current Maya world.  Despite the small camera we used with a light from a lighter, we were able to take a couple of decent photos which I have included.  There was a small altar-like table in the middle of the room, and the ceilings were low.  Only one way in or out, without windows.  I hope that any of you reading this who enjoy reading about the Maya, will understand my excitement.  This was a once in a lifetime event.  I will never forget that day. I have not been back to those ruins, but will.  That will be another article, soon.

Being able to explore this area in the “old days” led to great finds.  Another friend said to me one day, “Stop telling people about this area, they’ll only want to come”.  He was so right.  As the Eagles sang,  “Call someplace paradise, kiss it goodbye”.