Getting around on the cheap

If you have spent any time outside of Akumal, you’ve probably seen these white minivans speeding – emphasis on speeding – up and down the freeway. They drive like mad-men, stop frequently and abruptly, and sometimes have doors that look like they are about to fall off. What exactly are these crazies? 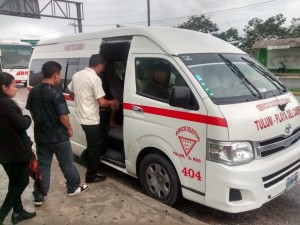 They are Colectivos.  Colectivos are shared transportation, like a group taxi. They are the primary means by which locals get from town to town, since wages do not often allow them to afford a car. Colectivos are very affordable, as long as you know what to do and what to say, but more on that later.

Colectivos each have a colored stripe down the side and you may notice that there  are different colors. The color of the stripe actually denotes the sindicato (union) to which the colectivo belongs. In our area, we have three common colors:

It doesn’t really matter which color you choose, just know that you can expect the same service from them all. On any of the above colectivos you can get a ride from Playa del Carmen all the way down to Tulum, and anywhere in between. Most of these will have “TULUM-PLAYA  DEL CARMEN” printed across the front to let you know their operating area. There are also separate colectivos that operate between Cancún and Playa del Carmen, but you won’t often see those south of Playa del Carmen.

How to use a Colectivo

There are a few simple rules to make your colectivo experience a good one and to avoid getting price gouged.

1) Don’t act like a tourist.  This can be hard, especially if you are one!  But if you follow the rules below, then it’ll take care of itself.

2) Getting picked up.  There are a few locations where colectivos regularly stop, like the bus stops right outside of Akumal. Make sure you are on the  appropriate side of the freeway for the direction you want to go, north or south. You can wait with a group of locals and the colectivos will often stop, but otherwise just wave your arm when you see one approaching. They will slam on the brakes and pick you up. You can actually do this anywhere on the freeway – just wave your arm at the colectivo and it will stop. Also, at night you can wave a flashlight or the screen of your cell phone; they’ll flash their high beams to confirm and pick you up. While you’re standing there,  you will also attract every vacant taxi – just wave them by.

3) Getting in. Open the door, get in, shut the door, find a seat, and don’t say a word. The driver doesn’t need or want to know where you are going until you get there. If you offer the information at the beginning, all he’ll hear is: “I am a gringo tourist, charge me a bunch of money!”  Regarding seating, there may be very few places to sit, sometimes there might only be a milk crate. This is no time to be picky, just grab a seat anywhere.

4) Getting them to stop.  You need to tell the driver to stop when you are about 100 meters away from your destination. At this time yell “locationname, porfa!“ For example, you would yell “Akumal, porfa” if you were coming to Akumal. He will slam on the brakes and pull over. If you tell him to stop too soon,  you’ll end up walking a bit to your destination. Don’t worry, you’ll be able to watch a few locals do it first before it is your turn. By the way, porfa is just an abbreviated way of saying please in Spanish.

5) Paying.  This is critical! Get up, move to the front, and hand the driver the money you plan to pay. Have exact change. Don’t ask how much. DO NOT ASK! If you ask, he will give you a price that is likely double what you ought to pay. If you give him too little, he’ll tell you and you can quickly negotiate. As an example of rates, you can go from Tulum to Akumal for about $25 pesos a person. You can go from Akumal to Puerto Aventuras for about $15 pesos a person, and from Akumal to Playa del Carmen for about $30 pesos.

Colectivos run from about 5:00am until about 10:00pm every day. If you are trying to catch one on a weekday at the start or end of the workday, you might have to wait for a few full ones to go by, but they also might see you as a tourist and prefer you over a local (because you might pay more).

Don’t be intimidated. If everything goes wrong and you end up paying 50 pesos a person to get from Tulum to Akumal, that is still only about $3 USD, which isn’t too bad.

So if you feel like an adventure or simply want to travel on the cheap, try a Colectivo.