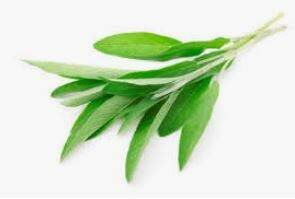 Also known as common sage, garden sage and Salvia officinalis, belongs to the mint family, alongside other herbs like oregano, rosemary, basil and thyme.

Sage is high in several nutrients, including Vitamin K, Iron, Vitamin B6, Calcium, and Manganese.  It also has as small amounts of magnesium, zinc, copper and vitamins A, C and E.

In addition, it contains over 160 distinct plant-based chemical compounds known as polyphenols.  These compounds act as antioxidants in your body, helping fortify your body’s defenses, neutralizing potentially harmful free radicals that are linked to chronic diseases such as cancer.

Research has shown that that sage may improve memory, brain function and symptoms of Alzheimer’s disease.  When given in small doses, sage was shown to improve memory in healthy adults.  In higher doses, sage elevated mood and increased alertness, calmness and contentedness.

It is believed that drinking 1 cup of sage tea twice daily can significantly increase antioxidant defenses as well as lower both total cholesterol and “bad” LDL cholesterol, and raise “good” HDL cholesterol.

Sage’s antimicrobial effects may support oral health by neutralizing microbes that promote dental plaque.  One study has shown that a sage-based mouthwash effectively kills the Streptococcus mutans bacteria, which is notorious for causing dental cavities.  Although more human research is needed, it is believed that sage may treat throat infections, dental abscesses, infected gums and mouth ulcers.

It’s believed that compounds in sage have estrogen-like properties which may help reduce the intensity and frequency of menopause symptoms, such as hot flashes and irritability.

Sage leaf extract has been shown to lower blood sugar and improve insulin sensitivity in humans; however, there is still not enough evidence to recommend sage as a diabetes treatment. More human research is needed

Test-tube and animal research suggests that sage may fight certain types of cancer, including those of the mouth, colon, liver, cervix, breast, skin and kidney.  Although this research is encouraging, human studies are needed to determine whether sage is effective at fighting cancer in humans.

Sage has been linked to several other potential health benefits such as alleviating diarrhea, supporting bone health and combating skin aging.  However, these benefits have not been extensively researched.

Sage, fresh or dried (ground, rubbed or in whole leaves) can easily be added to your diet in many ways.  For example, fresh sage can be sprinkled as a garnish on soups, mixed into a stuffing in roast dishes, chopped leaves can be combined with butter to make a sage butter, added to tomato sauce or served in an omelet.  Dried sage can be used as a rub for meats, as a seasoning for roasted vegetables, or combined with mashed potatoes or squash.