Solar prices have come down drastically in the last decade. A system that would have once have cost you $15,000 or 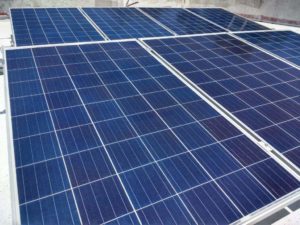 $20,000 might only cost $5,000 now. This solar price drop is even more apparent in our Riviera Maya. Ten years ago it was hard to find an installer for solar, and import costs were extremely high. Now, pricing is only a little more expensive than you would pay in the States, which is one of the cheapest markets.

The best time to go solar is now. You can go green while also saving some serious cash on your electric bill. Home, condo, vacation rental – they all make sense for going solar anywhere in the Riviera Maya. 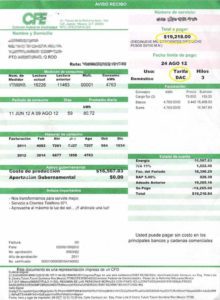 Going green is a great reason in and of itself, BUT another very compelling reason is saving money on your CFE bill. CFE (Comisión Federal de Electricidad) is Mexico’s sole electric provider and is run by the government. While Mexico’s recent energy reform might bring changes and possibly lower prices, the cost of electric generation and distribution in Mexico is still very high. As a result, prices are not expected to change significantly or very soon.

CFE helps ensure that people who can barely afford electricity have affordable electricity. They do this through tiered pricing and subsidies. If you are a working class Mexican, you likely have a few lights in your small home, a small refrigerator, and possibly a washing machine (but not dryer). You don’t have an air conditioner, a big house with lots of lights, and tons of electronics. This means CFE can set the electric tiers so that working class Mexicans pay around 4 cents (USD) per kilowatt hour (kWh) for their electric, someone who uses more electricity might pay a average of about 7 cents (USD) per kWh, while someone who uses air conditioning on a fairly regular basis might pay closer to 25 or 30 cents per kWh. It is not uncommon for people with a comfy home or a vacation rental to get a 60-day electric bill of 25,000 pesos (currently 1,400 USD)! With this high cost of CFE electric, the payback on a solar installation takes only 2-4 years! After that you are getting free money from the Sun and helping do your part to clean up our world.

If you like the idea of helping our environment, then solar is a great step. If you have a vacation rental, then going green is essential. More and more renters are inquiring about environmentally friendly rental options.  Being able to tell your prospects that you are “eco-friendly” and use solar to power most of your home can mean getting a renter or not. In that case it is a win-win, payback in drastically lower electric bills, and possibly more rentals.

Can I Do Solar In A Condo?

Even if your home or rental is a condo, there are options for you too! Roger from EcoCentro said that CFE has taken condo complexes into account for solar. The HOA/HOC would need to get together and decide where panels would be placed and which owners would participate. CFE will install a master meter for the solar that allows CFE to see how much energy is being generated. The HOA/HOC submits a document to CFE that states how the credits should be distributed and then each month the owners get their specific credits. For example, if Unit 101 paid for 50% of the system and unit 201 paid for 10% of the system, then each month 50% of the solar credit goes directly to the bill for 101 and 10% goes to the bill for 201. If the system is added to at a later date, then a revised percentage is submitted to CFE for future bills. It is quite an ingenious system that helps make it possible for anyone to participate in solar.

If your condo complex has very little space for panels, you can also consider installing solar to handle the power in the common areas. Most condo complexes have a separate power bill for the common areas that includes things such as lighting and pool pumps. This bill can be quite high, and an investment in solar means you are not only going green, but also that in the future the HOA/HOC will have more money each month to spend on other things (or drop price of dues a bit).

I have a home near Akumal and while I have had fairly reasonable bills, I have also been very close the the limit of DAC. DAC is the high consumption pricing tier that you get bumped into if you average more than 400 kWh per month in a rolling 6-bill (12 month) period. If you look at your CFE bill and you see that your Tarifa is DAC and not 1B, then you are paying the highest rate there is. In DAC there are no tiers, no subsides, just expensive electricity. I have young children and we might soon add a second floor or a pool, both which bring more energy consumption. So in an effort to both be environmentally conscious and to stay ahead of the consumption curve, I decided to make the jump into solar now.

Finding a Solar Company I Could Trust

As is my nature, I spent months understanding the CFE tiering structure and also researching the solar systems available and the local installation companies. Let me say that I have an engineering and tech background, so I am fairly proficient when it comes to electrical systems; it takes quite a bit to impress me. So it was easy for me to tell who was just trying to make a sale and who really knew what was right for me. I finally settled on a company by the name of EcoCentro Solar. Their local expert is Roger Sherman and he lives conveniently in Puerto Aventuras. His crew does installs from Cancun all the way down to Tulum and beyond. When I talked with Roger (he speaks English and Spanish) I was immediately impressed by his knowledge. This wasn’t some sales guy that was just out to make a commission. Roger has a huge installation on his own house, most of which he had just switched out recently so he could try out different models and gain first hand experience before recommending them. First thing he did was ask for a copy of my CFE bill so he could estimate how much solar I would need to keep me out of DAC and the highest tiers. His goal was not to sell me a system that covered 100% of my consumption (unless I wanted that), but rather to sell me a system with the best return on investment. I liked that. The first few hundred kWh of each CFE bill is dirt cheap (practically free), so from a monetary standpoint it makes little sense to buy enough solar to cover 100% of your needs.

Using my CFE bill, Roger did some math calculations on my current and historic usage and came back with an estimate of solar to cover my needs. Roger then came out for a site visit to determine where the gear could be placed and look for any other issues. With that information he was able to provide me a quote. For enough solar to cover my immediate needs I was looking around $5,000 USD*. This was much less than I had expected. As a comparison, I checked with some family members  in the States who had recently installed solar; for a similar system they paid about the same.  I was amazed at the pricing parity. Roger even provided all of his calculations and showed my projected savings per bill and per year, with which he was able to provide a projected ROI of 3 years and 8 months (had I been in DAC). He also showed that I would be reducing CO2 emissions by the equivalent of 16 mature trees!

*This price was based on my needs. One system does not fit all. Your needs will dictate how much solar you need and the cost of the system, could be more could be less. But either way the ROI will be great!

You never know quite what you will get in Quintana Roo when it comes to workmanship, so even though there were no red flags yet, I had reservations. But thankfully Roger and his team proved I had nothing to worry about. Once we knew the panels were en route, Roger was ready to get started. In order to affix the panels to the roof (in a hurricane prone area), they need to have a solid base.

For each footing, they first dug deep into the roof to reach the structure cement, into which they placed stainless steel

bolts affixed in place by a powerful epoxy compound. Atop this they added another layer of a different epoxy to ensure strength and water-tightness. They then built the footing on top that is an additional two inches above the roof. Once dry, his crew put waterproofing paint around the entire footing to ensure the watertight integrity of my roof. An entire day was spent ensuring the footings were done properly. These guys took pride in their work. Roger even sent me a little slide presentation (with photos of my install) explaining how they made the footings and why the method was superior to others and why he offered a 5-year “no quibble” guarantee on the work. I am pretty sure that these panels are not going anywhere. 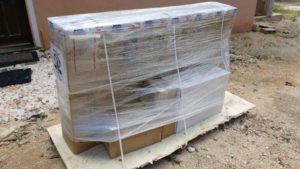 The equipment was on order and being delivered from Merida, so a few days later Roger told me that a delivery truck was en route. They arrived and dropped a nicely shrink-wrapped pallet of all my gear. That same afternoon Roger and his crew showed up and got to work finishing up the install.

The attention to detail and involvement of the customer in certain decisions (like placement of equipment) was fantastic. I have rarely had a contractor work on my house where I have not been terrified of the 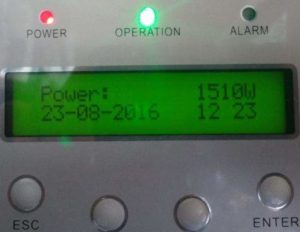 possible outcome.  With EcoCentro (at least Roger), I had no worries at all. In fact I was excited to see what they did
next. The final step was the blessing for CFE. They sent an engineer to verify the system was installed correctly and wouldn’t pose a risk to me or the CFE line workers. With that out of the way, they reprogrammed my electric meter to run bidirectional and I started generating my own electricity. It is kind of a cool feeling to think that you are creating your own energy and know that your air conditioner is running off of rays of light. Knowing that my electric bill won’t be sky high also helps me sleep better at night.

So if you are anywhere in the Riviera Maya, and think solar might be right for you, then now is a great time to go green. I would also highly recommend that you reach out to Roger Sherman at EcoCentro Solar and save yourself the hassle of trying to find someone you can trust. You can reach him via email at [email protected] or on his Mexican cell at (984) 157-9032. Mention AkumalNow for a free energy analysis. He will review your CFE bill and provide you a detailed analysis of your solar needs, how much you can save, and how long it would take for the system to pay for itself.