There is nothing quite like getting on an airplane (especially during the winter) and landing in sunny Mexico. But as with all other major destinations, travel to Mexico is not always smooth. That is why more and more holidaymakers are looking for direct flights to their favorite destinations.

Did you know? Chichén Itzá actually has its own large international airport, though it really never “took off.” 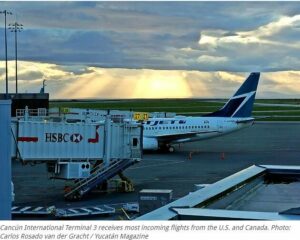 This airport is the second-busiest in Mexico (after Benito Juárez) and third in Latin America. It acts as a major hub for Cancún, the Riviera Maya, and southeast Mexico.  The airport has four terminals connected by free shuttles, which leave every 15 minutes. 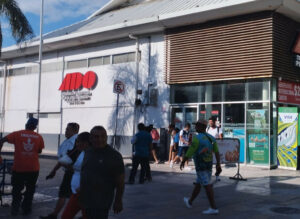 One of the trickiest things about arriving at Cancún International is finding the best way to get to your final destination.  Unless you have a pre-paid transfer waiting for you, your best bet is to find the ADO bus counter in whatever terminal you happen to be in and go from there. 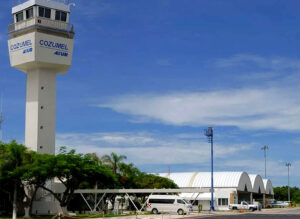 Though much smaller than Cancún’s airport, Cozumel International is still a great gateway to Mexico’s Caribbean from several U.S. and Canadian cities, including Toronto, Houston, Dallas, Austin, and Montreal. The fact that the airport is so close to town and all of the resorts also means short transfer times and less of a need to leave super early.

Pro Tip: Ferries from Cozumel to Playa del Carmen leave every half hour, but it’s still a good idea to buy your ticket ahead of time

Many people may be surprised to see Chetumal on this list. But as it happens this tiny airport is really growing at quite a surprising pace. At the moment the only international flight from Chetumal is to Guatemala City, but if you are looking to visit  Bacalar or go on to Central America  from a trip to Mérida or Mexico City, flying into Chetumal makes all the sense in the world.

Pro Tip: If you need a wheelchair or assistance at any airport in Mexico, the airport must offer these services at no cost. 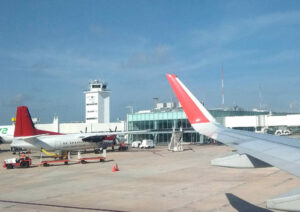 Like Chetumal, Mérida’s airport is currently experiencing quite a bit of growth, but on a much larger scale. Officially the Manuel Crescencio Rejón International Airport, Mérida’s airport has recently been refurbished and is now among the best in the Peninsula.

The Airports of Mexico City