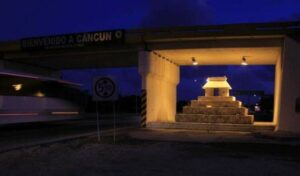 The story says that the bridge that connects the Hotel Zone of Cancun, also known as Kukulcan Boulevard, with Cancun-Tulum Federal Highway 307, could only be built until the Mayan traditions around the aluxes were heeded: It was necessary build a small construction as a tribute to the aluxes, which can be seen at the entrance to the city.It can be said that the success that the airport has had is due not only to the beauty of the beaches and natural landscapes that attract tourists to the Riviera Maya and specifically to this city, but also to the “protection” of the aluxes.

The aluxes are a kind of elves that are part of the Mayan mythology. It is said that the ancient sorcerers created clay figures with features similar to their gods and, through a ritual, made offerings to the figurine so that it would provide protection to their homes and crops.  Aluxes are goblins, sometimes mischievous and sometimes evil, who play tricks on those unlucky enough to come across them, even if the unlucky one is unaware of their existence.

The legend of the bridge in Cancun

Although it was not a complicated work to carry out: a bridge with two lanes and four circular returns, it was necessary to appeal to the old Mayan traditions.

The workers could not explain why, when they arrived at the workplace, they found bent rods in the columns, damp cement, missing tools and constant disturbances that prevented the progress of the work. Some versions say that every morning the building woke up completely collapsed.

Why build a house?

“They are the aluxes”, mentioned one of the workers. “They are angry,” said another, and this immediately unleashed the laughter of the other colleagues who were there. However, since most of the people who were present in that work area were of Maya origin, they agreed that the elves were showing their annoyance and dissatisfaction because the outsiders were invading their domains. “You have to build their house for them,” explained the master mason, and although the request was strange for those who did not know the legend, they did not hesitate to pay attention, because it was worth trying if that would help stop the strange delays without apparent explanation.

After a ritual in which they asked for permission and gave offerings to the aluxes of the area, the workers built the pyramidal structure that can be seen today under the bridge. 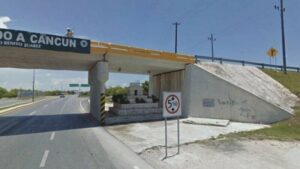