Part 5: A Phoenix And A Tree House

The day I received pictures of my house rising like a phoenix above the top of the jungle canopy was a glorious day indeed.  I’m not sure exactly what it is about the floor going in that seemed to give some permanence to this build, but it did in my psyche, as though its certainty depended on it – as though the structure cannot be undone. Everyone I run into that lives in the same development comments on the rate this house is going up, and they are astonished at the progress the construction crew is making every week.  Of course, I am thrilled and maybe still a little in shock after 22 months that “it” is actually happening.  Surreal, to say the least!

Nightly walks to the site continue to surprise at that day’s delivered items: rebar, sand, rock, cement block, and steel, all perk my imagination. 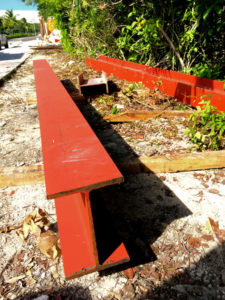 The steel girders were interesting to me.  They arrive black, then are painted a rust color. According to the architect, the red paint is an anti corrosive finish that prevents the steel from rusting. When they are in the finishing stage, a special black paint is applied that also helps prevent corrosion of the steel. The black part of the steel is what will be visible as part of the architectural design when the house is complete. As for placement, these large beams are carried and installed by machinery, a massive undertaking considering how many there are in this particular house design.

A makeshift blue tarp is installed above a central area to keep an area dry, I assume for the workers should rain hit. It’s directly above an area where sand, water, and cement are mixed by hand to create the mortar to seal concrete blocks into place. Wood tables are built to use as work surfaces. Nearby, a small fire pit has been created where workmen heat their lunches. On my nightly walks my dogs love this particular area because they usually find small pieces of food, mostly cooked chicken probably fallen from someone’s taco – this, they quickly devour.

What looks like corrugated cinder blocks are used to create the ceiling of the main floor. They fit together like a puzzle with rebar reinforcement and are braced by lumber posts for temporary support. Finally, cement is poured above to seal the entire ensemble together.

Lumber and plywood are formed with rebar to create the “cat-walk”, as I call it.  It’s an open air platform that will connect the staircase to the art studio and guest bedroom. Cement seals it into place. It overlooks the kitchen which will be a two-story open air space.

Oh, and there is still a tree in the kitchen. Hmmmm …

By the way, it is best to have written into your contract a series of structured payments that occur based on portions of the build being completed. For example, (Payment 1) 20% downpayment on signing the contract, (Payment 2) 20% once the Construction License is received (this is where my build got stalled for 22 months), (Payment 3) 30% upon completion of the second floor ceiling, (Payment 4) 20% upon completion of all the floors, and finally (Payment 5) the last 10% once all work is completed. So you are aware, reaching Payment 3 “completion of the second floor ceiling” does not mean the first floor will be done. They aim to get these ceilings up as fast as possible, so they can collect your money as fast as possible, despite logical portions of the home being completed beforehand. Welcome to Mexico.

My lot backs directly onto a mangrove, and contains mangrove within the surveyed area. It is also very close to the ocean, although not directly on the ocean. Why is this important? If you are building near an environmentally sensitive area, it is guaranteed Mexico’s federal environmental protection agency will get involved. They will be the determiner of whether you can ever build on the lot that you just emptied your bank account to buy. Yes, you may have just bought a lot that can be later deemed “unbuildable”. What does that leave you with? Nada! You’re out all the money you paid for that lot, and you likely will never be able to re-sell it. Will you be told this by your realtor or lawyer before you buy? Probably not, as they are not required by law to do so. Ethically, they should, but they probably won’t.

Who is the “great determiner” of the future of your lot? SEMARNAT. It is the Secretariat of Environment and Natural Resources or in Spanish: Secretaría del Medio Ambiente y Recursos Naturales, SEMARNAT, Mexico’s environment ministry who is charged with the task of protecting, restoring, and conserving the ecosystems and natural resources of Mexico. Their goal is the fostering of sustainable development. All good stuff!

Now that SEMARNAT has approved the build on my lot, albeit with modifications to the design which I describe below, there is still a little part of me that wonders if something else is going to happen to stop it in it’s tracks yet again. Will someone at SEMARNAT suddenly wake up one day and decide, “Oops, we made a mistake. We never should have allowed that house to be built.” And with the quick strike of a pen, they tell me to tear it down. I logically know this won’t happen, but I still have waking nightmares about it!

This reminds me of a reference from Part 2 of this series called “Hallelujah”, where I say,  “The issues that occurred on my Mexico house stem from a series of missteps and oversights, plus one gargantuan screw-up by a third party which resulted in a stream of bureaucratic nightmares.” That misstep was so gracefully completed (insert sarcasm) by the land survey company, that while surveying the land, two massive mistakes took place:

These mistakes led to an 8 month investigation by SEMARNAT into the land use, mitigation, and viability of my build – essentially, this investigation was going to determine whether the darn house could ever be built on that piece of land.

In case you didn’t know, mangroves are nationally protected and if one is damaged in any way, it’s serious. What occurred on my lot nearly meant my retirement dreams going down the toilet, all because some guy on a piece of equipment didn’t do his job properly. How can you prevent this situation? 1) Have the land survey company monitored while they are on the property. 2) Video record if possible and 3) insist the developer be present.  Unfortunately, I was 5,000 km away in Canada at the time and was relying on the professionals to do their job. That didn’t happen.

Now that permissions from SEMARNAT are in place, and the build is happening, all of this becomes a moot point. The fact that the build is legal, is being done in a way that is protecting the mangrove and the environment, make it more valuable in the long run. The impossible was made possible – which makes it just like the unlikely birth of baby elephant in the Mayan Riviera.

All of this now leads me to “A Tree House” which is a good-news, bad-news story.

Of course, there has to be a downside for there to be an upside, and it has to do with my house changing from being your everyday standard house-on-a-lot with a grassy yard, to a treehouse. Yes, you read that correctly, my house will now be a tree house.

Enter SEMARNAT again! Although they said thumbs up to my build, they also dictated what will be allowed on my lot and what won’t. Despite being told for two years by the developer that the lot could be built up to the height of the roadway with land sloping and draining appropriately, all in accordance with environmental protection, word came down that it wasn’t going to be allowed. This means the foundation will be above ground level by 1.5 meters, so access to the house from the street needed to be redesigned. As for the “yard,” no grass can be planted, so a rock screening will be scattered on the ground instead. For someone that has five pets (two perros and three gatos) all of whom love to go outside but are confined to the yard, this was a major deal. Having grass to run around on was going to be something I thoroughly looked forward to – no more. Thankfully, my architect is creative and came up with the idea of a bridge system to connect where the cars are parked, to the casita and the house. The bridge will run along the pool and will become part of the entertainment space. Lighted poles and rope railings will truly give it a unique “up-in-the-trees” feel.  I have no doubt that it will look beautiful and undoubtedly, it will be totally unique to the area, but I am disappointed that I won’t have my grassy yard. Then again I also won’t have yard maintenance! I won’t need an irrigation system! I won’t need to add landscaping! All of which is money saved! I guess, all in all, it’s a livable change. At this point, I don’t have a choice but to see the positive side, right? Treehouse it is!

This late in the game, with the baby elephant’s head crowning, I don’t see any other choice but to blink blankly when I get more bad news, refocus, think positive, and push … forward, that is. Kind of like labour, don’t you think? She is being born with all her warts and bumps, and imperfections, but I will love her anyway. She will be beautiful, and I will appreciate her due to the pain she caused me! (I can see all the mothers out there nodding in agreement.)

Is it worth it in the end? That’s still left to be seen. Whether I choose to live in this tree-house long-term, which was the original plan, is still yet to be seen. I may sell it or use it as a rental – it is giving me some options in an otherwise uncertain future. Funny though, I have never been uncertain about my future my entire life. I have always been a planner and knowing what is up ahead has been my forte. Not anymore! I need to let the future unfold as the universe will have it and accept things as they happen. For the first time in my life, I think I will just surrender to it and let go. And for the first time in my life, I think I’m okay with that.