“There are in life, two types of people” I was once told by a dear friend, “There are green-lighters and red-lighters.” Green-lighters, he explained, are people who travel through life like a car travels a city street with nary a concern, speed-bump, or traffic light to slow them down or alter their pre-destined path or trajectory in life. They weave in and out of traffic catching every green light along the way. “They slip through life like an egg off teflon”, he jested one time. Red-lighters are people who, through no will or action of their own, seem to cross paths with every possible obstacle that fate has to throw at them. “They’re the egg that gets stuck to the pan”, hitting every red light on the road of life. My baby elephant (aka: the house) seems to be a red-lighter baby.

Now if you haven’t been reading this series on what it’s like to give birth to a Mexican elephant, in a nutshell here it is. Baby elephants take 22 months in gestation. It took 22 months from the time of signing the contract for the first shovel to go in the ground to signify the start of construction on my house. It feels like I’m giving birth to a baby elephant! And just like the chances of seeing a baby elephant born in Mexico (nil), it can be just as rare to see a house built from the ground up in Mexico in under two years. [*You can read parts 1, 2, and 3 in Archives or by typing in the search bar “Elephant”]

I took a hiatus in May and June from writing about the house build because of what we’ve all been experiencing around the globe: this darn pandemic! Like everyone else on the planet, every thing in my life got put on hold, including the house. In all seriousness though, there are much more important things to worry about during a global crisis than getting my little house off the ground, and to be honest, it was almost a relief.  My baby elephant, with only 2.5 foundation walls in place, was in a period of rest while the world took a break and regathered itself. During that time I also “rested” and literally didn’t think about the house, the lot, the build, the contract, the money, my future, or lack thereof … it has been very unlike the tremendous daily stress and worry that had existed for almost two years leading up to this point. It was also a two month hiatus from friends and family asking me the same question they’ve been asking for the past two years, “How’s the house coming along?” Yes, the house was the big elephant in the room! During the pandemic, however, I could honestly say the elephant had left the building! 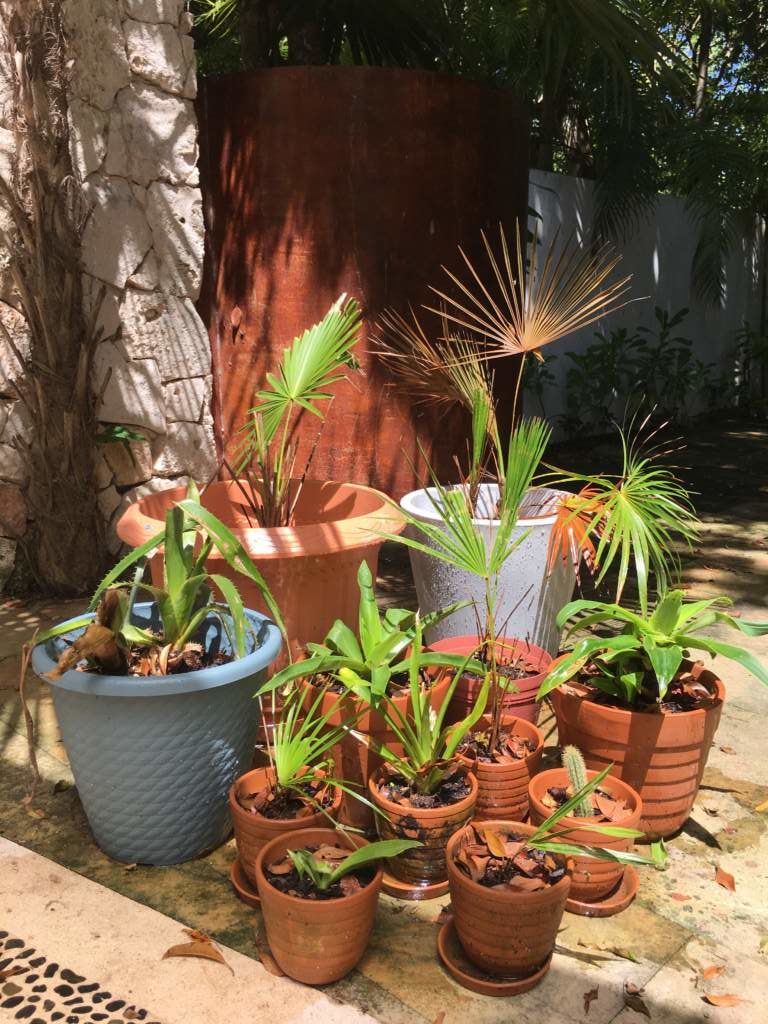 I walked over to the lot daily during the two months of no construction, and noticed that new, mysterious plant-life was emerging now that the thick jungle was cleared. It was like these little green lives saw the sun for the first time and were waiting to stretch skyward; however, I noticed they were in a path of definite destruction once construction resumed. They’d be trampled and squished, and I wanted to save their lives! Having a green thumb anyway, I was keen to do whatever I could. I planned a trip to Home Depot (the only place open during the pandemic) to buy a shovel, gloves, dirt, pots, hose, and watering can. I did my utmost to pretend at the cash register that these were “essential items”, and in my mind, they were! On my planned day for “the rescue operation” I prepared with copious amounts of DEET, loose clothing I didn’t mind getting filthy, and all my new tools. I took my time walking the lot, spotting where lives were in danger, and planned an exit strategy. It felt like I was  executing a covert operation, as security in my development was in full force and included uniformed police. I must say, I was a little nervous, so I brought my deed to the lot, passport, residency letter saying I was in the “Canje” (renewal) process, Canadian driver’s license, and a smile. I definitely got noticed as security passed by every 15 minutes, slowed to a stop, spoke to an unseen authority on a walkie-talkie, and made note of my license plate. I wondered if they’d noticed my license plates were expired and from out-of-state, both of which were banned by the Governor from being on the roads, for which I ignored in order to get my supplies at Home Depot to save my new-sprung babies (btw, the whole expired and out-of-state license plate thing is another very long story). Back to the lot …

I had no idea Mexican land was impossible to put a shovel in. Well, of course, you’d think I would have realized I’m digging on rock – it’s all cenotes and limestone under there – hard limestone, for meters. But this Canadian girl, coming from a province with soft, fertile soil, exerted a lot of energy and sweat, standing on the shovel head jumping up and down, with great verbal encouragement in the form of expletives. I was finally able to unearthed 12 plants! I potted them up and will replant them in my yard when the house is finished.

The only other matter of concern is a tree growing in the  middle of where the kitchen will be (see image at left). Hmmmm, not sure what will happen there … I don’t want them to cut  it down, but then I also don’t want a tree where my kitchen island is suppose to be. I’d rather save and replant, but I’m pretty sure I’m not going to be able to dig a tree out of the hard earth myself, heave it over the foundation walls, stuff it into my small car, drag it across my condo and into the back terrace for salvation. Where’s a superhero when you need one? I guess I’ll let you know what happens to this poor little tree in the next installment.

One day when I was paying the lot a visit, I noticed a large tree trunk cemented into the bottom of a water jug (see image below). On it is wired epiphytes, or air plants, done so to encourage their root growth around the trunk. They don’t need earth to survive as they absorb water from the humidity in the air. The workers must have noticed I’d been salvaging plants and thought I might appreciate these little beauties. I brought the epiphyte laden tree trunk home to my rental condo and am nursing it until it’s time to bring it back home to the land it came from. I will display it in all it’s glory, thanks to the construction workers. And that’s pretty much the most exciting thing that happened on the lot during the last two months.

Before the Governor shut down all industry in Quintana Roo, construction had been in full swing for three weeks. The jungle was cleared, the land surveyed, the foundation started, then Covid-19. Finally, June 1, 2020 arrives, industry revives itself and that meant construction could resume.

Remember the red-lighter, green-lighter theory on life? If it’s going to happen, it’s going to happen to this exhausted baby elephant. When June 1 came, so did tropical storm Cristobal and a week of torrential rain. I thought for sure construction would be halted again, but no, the crew was busy at work continuing where they’d left off like the last two months of global isolation had never occurred. After four days of rain, the fifth day was the worst with a forecasted 25cm (10”) soaking the ground and making any type of outdoor labour next to impossible. The right call was made and construction ceased for the safety of the workers.

Cristobal passed after a week. First thing Monday morning workers were back at it, and in no time the remaining foundation walls were fashioned and formed, and loads of new materials arrived. Rock, sand, cement, and steel girders for the walls and structure; orange and white pvc tubing for plumbing and/or electrical. All I knew was “stuff” was going up, and in, and it looked fantastic!

Now that isolation is over, the world is beginning to reset itself; whether it will be for the good or bad is still left to be seen. Either way, the house is underway once again. Foundation walls are complete, rebar is going skyward, steel girders and cinder block are rising to form walls, and pvc piping is being laid. The shell of a house is manifesting itself before my eyes each and every day.

I feel like my baby elephant was in hibernation for two months and has finally come out to see the light. Or maybe a better analogy is, it was in incubation for a period of time after birth, needing a respite from the long gestation period it had to endure. At this point it just doesn’t matter what has happened in the past, she’s “out and about” as we Canadians would say, and “damn it to hell” to that red-lighter theory … no one can stop her now!