— The following article is from the Yucatan Times

A major discovery has been reported by archaeologists in the Yucatan Peninsula, in south-eastern Mexico. A team of experts has discovered some astonishing cave paintings deep in a remote jungle. The find is exciting archaeologists who believe that it is of great importance. It is also leading to a debate concerning the nature of the paintings and what are their origin. The paintings are believed to be Maya but could come from an earlier culture and this is raising wider questions about the history of the Yucatan region.

The Yucatan has traditionally been associated with the great Maya civilization. They occupied the area for centuries and built a great civilization in the Yucatan and beyond. They flourished until the arrival in the area of the Spanish Conquistadors, but many of their descendants still live in the area. This culture produced many great works of pictorial art, that are found in museums all over the world.  However, it is believed that other cultures also inhabited the Yucatan before the Maya migrated to the area. 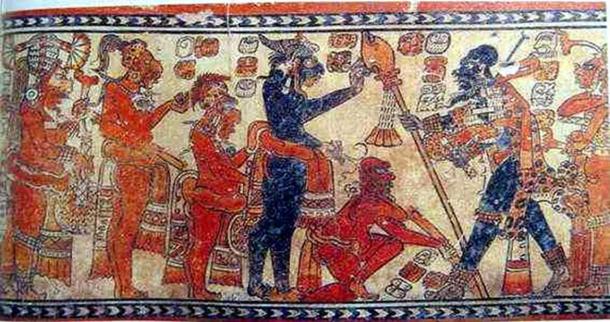 The Cave Paintings in the Yucatan cavern

The paintings were found by a team of archaeologists, led by Sergio Grosjean Abimerhi, from the National Institute of Anthropology and History (INAH). The paintings were found in a cavern at a depth of 12 meters (37 feet) in the east of Yucatan in a jungle area. There are approximately 3000 caves in the Yucatan and many are believed to contain archaeological artifacts or paintings. The cave paintings found by Grosjean and his colleagues have been called ‘the most significant of its kind in the state’ according to AL DAI .

The paintings are on a section of rock that is roughly 15 meters (49 foot) wide and 5 meters (15 foot) high.  The paintings include sets of handprints. There are a series of images, including geometric figures, a man, and some animals and birds. The paintings are in a variety of colors and their paint was made from local material such as red earth. According to The Archaeology News Network  the experts ‘don’t yet know what these cave paintings mean nor to what period they belong.”

The experts have made a preliminary study of the paintings and found that they have very different elements. One figure, that represents a human, holding a shield and a weapon could be a warrior or a hunter. Also, in the cave there is a small sinkhole, that is filled with blue water. Specialists from the National Institute of Anthropology and History (INAH), are expected to conduct more research in the coming weeks and months.

While many, including the team who found the paintings, have been quick to designate the paintings as Maya, this may not be the case.  The paintings have not been scientifically dated and the style may indicate that they are not from that culture. Some have called the works pre-Maya because of their style. There have been examples of pre-Maya paintings found, which are somewhat similar to the series of images, recently discovered in the cave.

The importance of the paintings

The finders have claimed that this could be the most important collection of cave paintings in the region, due to the variety that is found in the single location. It is expected to tell the experts more about the culture of those who lived in the Yucatan in the past. If they are Maya, they can add to our knowledge of that culture, specifically with regard to the evolution of that civilization’s pictorial art. If it is pre-Maya is could revolutionize our understanding of the history of the Yucatan. The finding is one that could encourage further investigations of the many caves in the area.