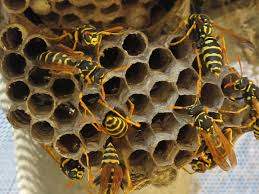 Wasps feed their larvae with insects, so they can be beneficial to gardens by controlling insect pests and pollinating plants. However, given that wasps are aggressive and their sting can cause an allergic reaction, you may want to keep them away from certain areas of the garden and house. Here in the Yucatan, insecticide may be needed on the beginning nest. Once you spray, watch out for them to move the nest to another location. However, Rebecca Straus, online assistant editor at Rodale’s Organic Life, suggests the following    6 non-toxic ways.

Research published in the Journal of Pest Management Science found that a combination of clove, geranium, and lemongrass essential oils repelled worker wasps completely. Try applying these oils by mixing several drops of each with water and dish soap in a spray bottle and coating areas on the outside of your home where wasps like to build nests—under eaves, porch roofs, and other ledges and crevices. Since fully covering all of those areas with essential oils would be impractical, target spots where you’ve found nests in the past, as paper wasps will build new nests in the same locations again and again, according to Clemson University’s Department of Entomology, Soils, and Plant Sciences.

According to Chris Walker, an eco-friendly wasp removal expert in southeastern Pennsylvania, you can tackle small hanging nests with a mixture of about two tablespoons of dish soap in a spray bottle filled with water. “The soap clogs their breathing pores (called spiracles) and they die almost instantly,” says Walker. “It’s actually a much more humane way to kill them than using pesticides, which can take hours to work.”

Peppermint oil may also be effective at repelling wasps, according to the same study from the Journal of Pest Management Science. You can try applying it as described above, or you can purchase EcoSmart Organic Wasp and Hornet Killer, which is mint oil-based, to target established nests. Try adding a mint plant to your garden. While not as potent as mint oil, the plant will aid in ridding the area of wasps.

Wasp traps work by luring the insects inside a container with some tempting treat, like sugar water, and then preventing them from escaping. You can make one yourself in about five minutes by cutting the top off a two-liter bottle and inverting it inside the bottom. If the DIY route isn’t for you, you can also purchase a more heavy-duty trap online such as the one made by Rescue or a glass trap. However, Walker notes that traps probably won’t fully solve your problem because you might end up capturing wasps that are passing through your yard, rather than just the ones that belong to the problem nest. If using a trap, your best bet is to try to locate the nest and place the trap close to its entrance.

If you want to keep wasps from invading your house, preventative measures are key, notes Walker. He recommends sealing up tiny cracks, like those around the edges of siding and where power lines enter the house, and patching up holes in window screens. The best time to do this is in late fall after most worker wasps have died off, or in early spring before nests become active. However, if you do discover wasps inside your house, don’t try to seal the nest inside the wall, thinking they’ll just die off. “They’ll find their way out through vents or even chew through drywall,” says Walker.

According to the University of New Hampshire Cooperative Extension, wasp problems are usually worse in yards that have lots of food sources in the form of exposed garbage and recycling bins and composting food matter. Make sure the lids of your garbage bins are always tightly sealed, and maybe even consider composting indoors if you find your compost pile is causing problems.

For more information, visit RodalesOrganicLife.com or refer to an article by Rebecca Straus at http://www.huffingtonpost.com/maria-rodale/6-nontoxic-ways-to-keep-w_b_10454530.html