Visitors to Akumal Bay pass a statue of an Indian family, the warrior husband in front protecting his wife and children. Few realize that this is a monument honoring Gonzalo Guerrero, who chose to join the Maya and hence fathered the first mestizo family.

A Spanish sailor and adventurer, his exciting life could fill many seasons on Masterpiece Theater. Born near Palos in southern Spain, he fought the Moors under Queen Isabel of Castile, then sailed to the New World with Columbus.

In 1511, a caravel  sailing from Panama to Santo Domingo foundered in a storm between Yucatán and Jamaica.  Eight survivors landed on the coast in the neighborhood of Akumal, where they were captured and enslaved by the Cocum clan of the local Maya.  Hard labor and harsh treatment killed all but two, Gonzalo Guerrero and Gerónimo de Águilar. Guerrero was later taken to the area of modern Chetumal.  The local cacique (chief) recognized his value, freed him, and eventually married him to his daughter, Zazil Ha, with whom he had three children.

Guerrero remained with his new people, teaching them European methods of warfare to better resist the Spanish invaders.  In 1519 while Cortéz was reconnoitering the coasts of Mexico, he heard about the two surviving sailors and offered to ransom them.  Guerrero choose to remain; Aguilar left and became a translator for Cortéz.

In the years that followed, Guerrero led his people in the fight against the Spanish.  Given another chance to leave in 1529 when Francisco Montejo, conqueror of Yucatán, sailed into Chetumal Bay, he again refused.  In 1536 Guerrero led a fleet of fifty war canoes to Honduras to assist a local cacique named Cicumba in his struggle against the invading Spaniards.  Wounded in the battle, he died shortly thereafter.

For centuries he was reviled as a traitor by the Spaniards, but in recent times, Mexico has come to embrace its Mestizo status and to appreciate and honor the “Father of the Mestizaje,” who is credited with initiating the successful resistance of the Maya people in the eastern Yucatan Peninsula.  Four hundred years after the landing of Gonzalo Guerrero on what is now the Riviera Maya,  a truce ending the Caste War was signed in Chetumal and the “Eastern Jungle” was finally incorporated into Mexico. 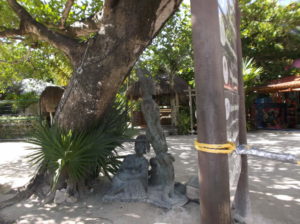 The statue of Guerrero and his family sculpted by Raúl Ayala Arellano was commissioned by Pablo Bush Romero in 1974 to commemorate this local personage.  Other castings were placed on the Paseo Montejo in Mérida, as well as in Chetumal and Cozumel.  Ironically, the original statue here in Akumal was damaged when it was pulled down during a demonstration some months ago by some among the new wave of conquistadores, who, intent only on the spoils of tourism, appear to be contemptuous of their local legacy.