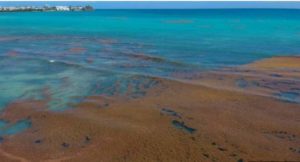 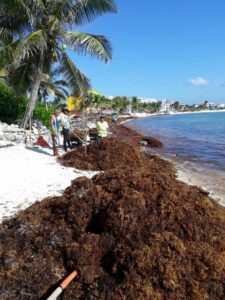 According to the experts, the influx of sargasso is tapering off – until next season.  Meanwhile we deal with it, some properties more than others, and all of us contend with the obnoxious odor.

Back in the 1980s, Dr. Teruo Higa, a Japanese professor of horticulture, discovered the benefits of the use of microorganisms in agriculture, then researched their use in areas other than crop production.  Microorganisms are already everywhere, the trick is to balance or counter-act them.  The impact of microorganism technology research can be felt in the global food crises, environmental degradation, and health care.

So back to the odor.  If you’ve walked past La Tortuga recently you’ve noticed a lack of odor, even after Lunita lobster Friday.  Henning B has been treating his garbage pit and sargasso with a microorganism product that he found near Mérida.  It’s based on Dr. Teruo’s research and is a cheap and effective means to rid our beach and street of the sargasso stink.  It will also have a positive effect on the water in the bay and mangrove as it seeps into the ground.

Stop by and chat with Henning, or look up Chan Ká Vergel Organic Farm and Learning Center online.