Mexico celebrates Día de los Muertos each year from 31 October to 2 November.  It’s a family celebration – a small, personal moment of remembrance that links one to the larger family and cultural community.   Because of its integral importance to the Mexican culture, in 2003 UNESCO named Day of the Dead a “Human Treasure”.

As part of the tradition, altars (ofrendas) are set up in homes to honor loved ones, welcoming them back with their favorite foods, drinks, and possessions.  Marigolds and copal are usually part of the ofrenda.

Parades called comparsas are held in many cities, towns, or neighborhoods.  People, some in catrina make-up or costumes, and bands drift through the streets, sometimes all night long. 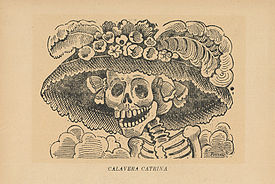 The catrina was created by José Guadalupe Posada in the early 1900s and was called La Calavera Garvancera, a reference to indigenous persons with European pretensions – a dead, empty skull dressed in a frou frou hat. The etching originally appeared in a leaflet that described persons who wore make-up to lighten their skin and dressed in the French style in an attempt to deny their roots. The popularity today of the calavera catrina comes mainly from the Diego Rivera mural Sueño de una tarde dominical en la Alameda Central (Dream of a Sunday afternoon in the Alameda Central).  This mural, which was completed in 1947, depicts notable persons, as well as the artist himself.

For Day of the Dead, cemeteries are decorated to welcome the departed.  Tombs and gravestones are tidied and flowers appear in abundance.  In Oaxaca gravesites are decorated with colored sand sculptures.  Families come late in the afternoon to wait for the spirits with picnics and music.  Quite often the get-togethers last all night.

The Mayan Garden Club will be visiting the Tulum cemetery at 3:00 today.  All are welcome to join.