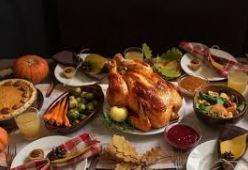 Thanksgiving Day in Canada has been celebrated on the second Monday of October since 1957.

The first official Thanksgiving was celebrated in 1859.  But the very first Thanksgiving in the new world dates to 1578, when English explorer Sir Martin Frobisher and his crew sat down to dine in Newfoundland.  The math says  their meal of thanks predates the Pilgrim harvest dinner by 43 years.  There is debate about exactly where and when the Canadian Jour de l’action de grâce occurred, but it was someplace north of the USA.

Turkey is usually eaten for Thanksgiving in Canada, though some choose to eat ham, chicken, or other proteins.  The turkey is usually accompanied by stuffing, sweet potatoes, corn, gravy, and fall veggies like squash. The standard dessert is pumpkin pie.