On April 13, 2015 the Akumal Fish Refuge became a reality.  This was a big step for Akumal in the continued efforts of many individuals and  many organizations to help protect the marine ecosystems and sustainability of marine resources in Akumal Bay and surrounding areas.  This project has been in the works since 2010 and Centro Ecological Akumal(CEA) with  numerous others involved  are very pleased in seeing this effort come to reality.  Press release below: 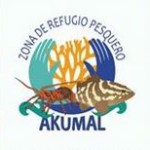 Conserving the Marine Ecosystems and Sustainability of Fishery Resources in Akumal.

AKUMAL, QUINTANA ROO—On April 14, SAGARPA (The federal department that overseas agriculture, livestock, rural development, food, and fisheries) declared a new fish sanctuary in the area of Akumal based on the management studies produced by Centro Ecológico Akumal in conjunction with the Fishing Cooperative of Tulum and the technical support and approval by INAPESCA.

The Zona de Refugio Pesquero de Akumal (ZRPA) covers the 7.6 kilometers in the Alcadia of Akumal stretching along the coast from the Caleta de Yalkuito to the southern limit of Hotel Gran Bahia Principe and outwards 1.3 kilometers (at the widest point) off the shoreline to protect 21 species of fish and crustaceans of commercial interest.

Commercial fishing activity is not permitted within the refuge. Sport fishing, however, is authorized in the refuge area only if it is catch-and-release. More details can be found in the decree published in the Diario Oficial de la Federacion (DOF).

The main benefit of preserving this area, from a biological point of view, is the recovery of the fish stocks and reef habitat, which affects the overall recovery of the coastal ecosystems,” explains Oceanographer, Miguel Angel Lozano Huguenin, program coordinator of the coastal management program at Centro Ecológico Akumal. “Also, the fish refuge would allow the growth of the stocks that can then spread to other adjacent fishing areas.”

Like other Caribbean coastal areas, Akumal Bay has seen the deteriorating health of the coral reefs, with 50 per cent mortality and increased incidence of disease, as well as a 60 per cent reduction in the density of fish in the past seven years.

“There are multiple factors in ensuring a healthy and sustainable bay,” explains Ivan Penie, research program coordinator, Centro Ecológico Akumal. “In addition to better integrated coastal management, proper treatment of wastewater, control of tourist operations and adequate protection of the aquifer, last week’s official declaration of the fishing refuge (ZRPA) is a complementary management measure for the conservation of Akumal’s marine ecosystems and resources.”

“The decree of the fish refuge has been years in the making. Since its inception, Centro Ecológico Akumal has taken the lead, but it wouldn’t have been possible without the dedicated and collaborative efforts between the Fishing Cooperative of Tulum and the Kanan Kay Alliance, and of course the support of many individuals and institutions,” says Dr. Hector Lizárraga-Cubedo, director of Centro Ecológico Akumal.